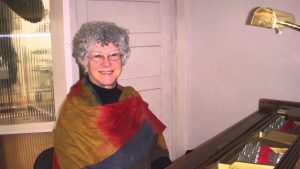 Music From Another Place:

A conservatory-trained, prize-winning pianist who has showcased the works of Cuban composers, Mozart, Bach, and many other composers to an international audience, Bautista is now one of the primary performers of the Gurdjieff/de Hartmann piano music.

“For many people, music is something to consume,” says Bautista. “Music is really a connection with the invisible world. But human beings have a very weak connection to that world.” To bridge the gap, a person needs “to be open.” “I and almost everyone else always stop what is new with our old ideas and habits. For receiving the new, I need to be vacío, ‘empty.’”

“Yleana Bautista must be one of the greatest unknown pianists in the world—unknown to us, I mean, since she has toured and been applauded throughout Europe, Russia, and Latin America,” writes Stephen Schiff in The New Yorker magazine. “She is extraordinary and plays with a sensitivity and dynamism that are absolutely thrilling.”

“In the pianist Yleana Bautista, we find a rare amalgam of sensitivity, intelligence, musicality and brilliant technique,” writes film composer Laurence Rosenthal (“The Miracle Worker,” “Becket”). “Especially in the music of Gurdjieff/de Hartmann, she demonstrates an extraordinary capacity to reveal what is unique and undefinable, beyond the notes, into an interior world, the spirit that she radiates.”

Bautista began her musical studies in her native Cuba and later at the Tchaikovsky Conservatory in Kiev, Ukraine, where she earned her Master’s in Interpretation. In 1970, she won first prize in the National Piano Competition sponsored by the National Union of Writers and Artists of Cuba (UNEAC). She moved to Mexico in 1992 and became a Mexican citizen. She has appeared as a soloist in concerts in Europe, the United States and throughout Latin America, recording four CDs with Cuban and Latin American music as well as music by Gurdjieff/De Hartmann. Since 2015, she has lived in Miami, Fl.

Spiritual teacher G.I. Gurdjieff began collaborating with composer Thomas de Hartmann in 1924 in writing music for the piano. In a unique working method, Gurdjieff would dictate the melody, whistling or playing it with one finger on the keyboard, while de Hartmann harmonized, formalized and transcribed the music, always under Gurdjieff’s close supervision. They worked on more than three hundred pieces between 1924 and 1927, of which one hundred and sixty were completed. After these three years, Gurdjieff never composed again.

About the Sierra Gurdjieff Study Group

The Sierra Gurdjieff Study Group, a nonprofit corporation in the State of California, is dedicated to the study and preservation of the ideas and methods of G. I. Gurdjieff.

Single tickets for this performance are $25, available in advance only. Seating is very limited. For more information visit events.sierra-gurdieff.org. Tickets are available at bautistarecital.brownpapertickets.com.

Free parking in front, on the sides, and in the rear of the building, including “Hilti Only” sites; in the Simas Flooring parking lot next door and down the sides of its building; and on-street parking on Ramona. Reception to follow the recital.